We in Alberta owe President Elect Donald Trump a great deal of thanks.  It is excellent news that the Kinder Morgan pipeline and Enbridge Line 3 upgrade were approved by the Trudeau government but the reality is those approvals were entirely a consequence of the US Presidential Election.

Energy and trade will be the two biggest priorities of President Elect Trump.

Achieving American energy independence especially will undoubtedly be critical during his presidency.  Keystone may be a major contributor to that policy.  President Elect Trump is on record of supporting the Keystone XL pipeline.

A puppet of the various middle eastern oligarchs Hillary Clinton likely would have preserved the status quo of American dependence on foreign oil if she won the presidency.  Being friends with the American railways and climate change barons she likely would not have supported Keystone.  This would have given Trudeau cover to stall, dither, and reject all pipelines.

That did not pan out for Trudeau and instead, the nightmare scenario the entire left wing establishment thought impossible came to be reality.  President Trump.

Trudeau put his foot in his mouth during the campaign by criticizing Donald Trump.  Doing so preemptively destroyed any good will between himself and the President Elect.  The coming negotiations will not be pretty.

What could possible go wrong?

The approval of the Kinder Morgan pipeline especially is a knee jerk reaction by Trudeau who probably never imagined before November 9th that NAFTA might be renegotiated.  There are many serious issues President Elect Trump will put Trudeau behind the 8-ball with but NAFTA will be the most concerning for him.

NAFTA was not enough to get an approval for Keystone XL but a Trump Presidency likely will be.  Western Canadians were left hanging while TransCanada Pipeline took the Obama Administration to a NAFTA tribunal over the opposition.  Were Hillary Clinton elected, it likely would have stayed there indefinitely.  On the other hand, NAFTA did enable the Eastern Canadian manufacturers to stay in business while American Great Lake States came to be known as “the Rust Belt.”

With the exception of Illinois, those former manufacturing giants voted to Make America Great Again.  Undoubtedly the people in those States noticed that Southern Ontario (which voted for Trudeau) was still making cars while their own factories were being sent to Japan and China. 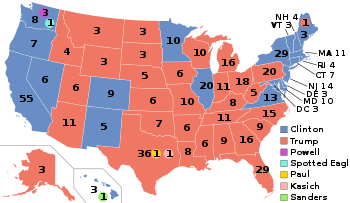 Those states are also are sitting on significant shale oil basins.

Electricity is the most important input in any manufacturing process.  With their overpriced “green” energy, Ontario manufacturing will have a very hard time when their US neighbors start fracking like there’s no tomorrow under President Elect Trump.  Most importantly, natural gas is a byproduct of the fracking process and is practically free.

Free natural gas will drive down the price of electricity in the American manufacturing states in such a way that those states could open industrial 3D printing plants that can completely wipe out Eastern Canadian manufacturing.

In addition to crippling debt and a tidal wave of retiring Baby-Boomers, Ontario especially is in for a great deal of pain when President Elect Trump renegotiates trade agreements that “put America first.”

Trudeau did not seem very comfortable during the press release announcing the pipeline approvals.  I can only smile when I think about how uncomfortable he will be during meetings with the President Elect discussing trade, energy and defense.  Three portfolio’s Canada has very little leverage against the Americans that President Elect Trump can drive a very hard bargain with.

As is evident from his public announcement of his willingness to renegotiate NAFTA almost immediately, Trudeau has shown he does not know the first thing about negotiating.  Namely, never give in to your opponents demands without even knowing their terms.

The approval of the Kinder Morgan Pipeline especially is an obvious attempt by the Trudeau government to give President Elect Trump the impression that Alberta oil is not entirely at the mercy of the Americans.  Unfortunately, Trudeau has already undermined his position by showing how weak and clueless he is.

Besides the obvious specter not being “fired” by President Elect Trump, it probably was an easy decision for Trudeau to approve the pipelines.

He may have won a high number of seats in the Federal election in the Vancouver area, but the election was already decided by Ontario and Quebec, long before those votes were even counted.  The anti-oil, anti-pipeline hippies in Vancouver will have a bit of a hard time reconciling how their champion could have betrayed them so spectacularly.

To Trudeau, however, there is very little risk losing their support and those seats.  If the pipeline approvals spark a divisive regional conflict between Vancouver and Alberta and cripples his opponents, he will still probably win Ontario and Quebec in the next election.

By crediting Rachel Notley’s Carbon Tax as justification for his approval, Trudeau is also able to throw every provincial and the federal conservative party into disarray.

The Wild Rose, Alberta Progressive Conservatives, the Saskatchewan Party, and the Conservative Party of Canada are all vocal opponents of Trudeau’s and Notley’s climate change dogma.

The Alberta NDP touted that their radical climate policy would give them the “social license” to gain pipeline approval.  Trudeau’s approval will give the impression that such radical policy was critical in the pipeline approval process.

In actuality, the approvals are a Hail-Mary play by Trudeau to cripple both of his domestic political opponents and improve his obviously losing hand against President Elect Trump.  You probably will not hear that in any press release.

As I noted in a previous post: the end of conservatism is the beginning of separatism.

Most definitely, the Trudeau-Notley pipeline play will do a great deal of damage to the Canadian conservative parties.  So much so that the Alberta NDP may make a spectacular comeback in public opinion polls by next election.  They might be able to win another majority in the 2019 Alberta provincial election.

As is evidenced in my home city of Calgary (with the highest unemployment in the entire country) the NDP are no friends to the average Albertans.  Particularly to those who do not work for the government (Edmonton seems to be doing fine, in comparison).

President Elect Trump on the other hand, seems to be doing a great job at bringing about positive change for our province, even though he is not a Canadian.

If the President Elect keeps it up, the odds are good we Western Separatists will succeed in accomplishing our goal of making our provinces not be Canadian either.

3 thoughts on “Thank You President Elect Trump for the Pipelines”